Out of stock
SKU
S12MVBMTTC9
$192.34
Add to Wish List
Star Wars (2012) Movie Vehicle Boxed Trade Federation MTT (Multi Troop Transport)
Details
This vehicle is big! It includes over 21 figures (20 Battle Droids & 1 Obi-Wan Kenobi) with accessories.  This is a must have for collectors and diorama builders!

This incredible TRADE FEDERATION MTT vehicle will take you to new heights of realistic Star Wars action! Just like the vehicles that deployed wave after wave of Battle Droids in the Battle of Naboo, this massive MULTI TROOP TRANSPORT (MTT) vehicle's forward hatch opens and releases the motorized troop deployment rack, which can hold the 16 battle-posed INFANTRY DROID figures that come with it! Side hatches open to reveal racks for your 20 blasters. 4 PILOT DROID figures complete the TRADE FEDERATION MTT vehicle's crew, but also included is a fierce OBI-WAN KENOBI figure with lightsaber! The electronic battle and Droid sounds will make the action all the more intense as you fire the vehicle's missile launchers and pivot the cannons in battle.

/!\ WARNING: CHOKING HAZARD-Small parts. Not for children under 3 years. 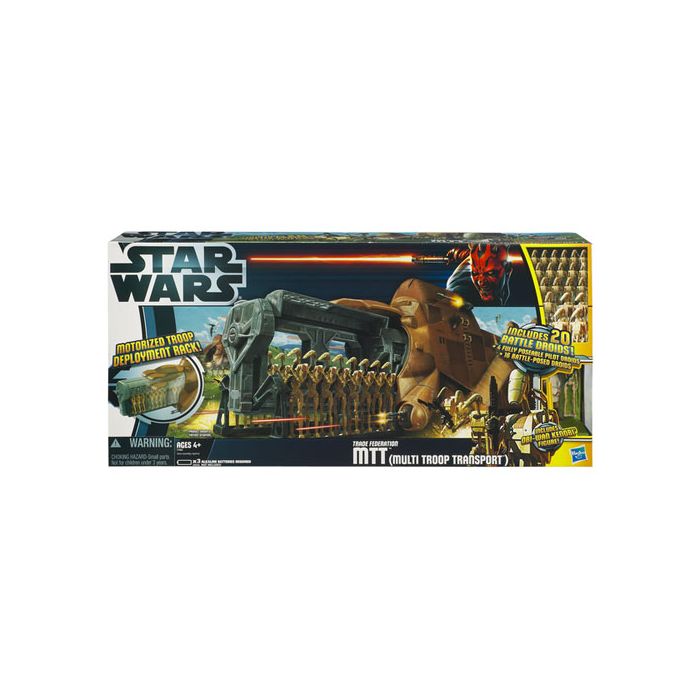